If we're going to talk about decolonisation, let's go the whole hog 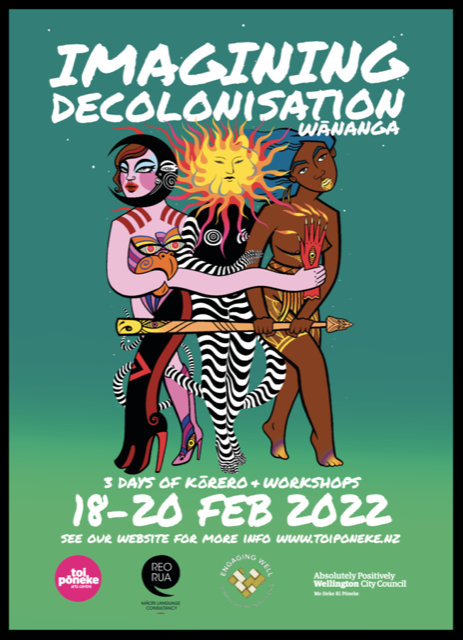 Some of New Zealand’s most divisive mischief-makers are embedded in local government, where they appear free to pursue their ideological agendas unencumbered by any checks or restraints, generously subsidised by ratepayers who are given no chance to say whether or not they approve of their money being spent on extremist causes.

A perfect example is a forthcoming 3-day wananga (forum) organised by the Wellington City Council-funded Toi Poneke arts centre and entitled “Imagining Decolonisation”, for which the capital’s long-suffering ratepayers will pick up a big part – if not all – of the tab.

To convey the tone of this event, I can do no better than quote from an official council press statement:

The event … will bring together academics, students, artists, writers, treaty workers, activists, politicians and change makers to discuss and create steps towards what an equitable future in a decolonised Aotearoa could look like.

“We have been through a process of unlearning some of our past – and now the time is to come together and relearn in order for us to move forward together,” says Karepa.

Councillor Tamatha Paul is pleased to be a part of the event for a number of reasons.

“If Covid has shown us anything, it is the illumination of deep-rooted inequality in New Zealand. Amidst trying to keep our communities safe, trying to keep a roof over our heads and stay afloat, there has been little time to dream of a decolonised Aotearoa.

“I’m excited to be in wānanga with rangatira and rangatahi to collectively imagine a better, fairer society and to inspire action.”

(For a more detailed breakdown, if you have the fortitude, you can read the full programme here.)

It goes without saying that people are entitled in a free society to indulge in undergraduate fantasies to their hearts’ content. Problem is, they always expect to do it using Someone Else’s Money, and that Someone Else – in this case, the ratepayers of Wellington – usually gets no say in the matter. That’s the real issue here.

The event has been planned and organised using council staff, money and resources, so bears the council’s imprimatur despite its flagrantly – indeed, provocatively – political nature. Whether attendees will pay a fee to attend isn’t clear; but even if they do, we can be sure it won’t go anywhere near covering the cost.

What, I wonder, does Mayor Andy Foster, who’s nominally a conservative, think about the council’s backing for the wananga? Does he approve, or did he look the other way because he’s intimidated by aggressive activists on the council such as Tamatha Paul (whose fingerprints are all over the event) and has no stomach for a fight?

Advocates of decolonisation want nothing less than the total repudiation of Western civilisation, along with democratic government and all the other benefits that flow from it. To be replaced by … what, exactly? Participants in the wananga will have their own ideas about that, but their model for a decolonised New Zealand is unlikely to be one most New Zealanders would endorse.

On Waitangi Day, it’s possible to acknowledge that some aspects of colonisation were catastrophic for Maori – most obviously the loss of their land – while simultaneously regarding the neo-Marxist notion of decolonisation as absurd and dangerous. Since when was it the cash-strapped Wellington City Council’s function to sponsor a gab-fest for fringe extremists bent on overturning the status quo?

One last thought. It’s probably too late to suggest it now, but I’d be happy to speak to the wananga about my own imagining of decolonisation. I would invite the participants to visualise a country where there’s no rule of law, no democratic government or accountability on the part of leaders, no wheel or internal combustion engine, no printed word, no science or literature, no Western music, clothing, art or entertainment, no cities, no schools or universities, no social welfare or government subsidies and no economic development. I mean, if we’re serious about decolonisation, let’s go the whole hog.

"We have been through a process of unlearning some of our past..."

I don't like this word "unlearn". According to my dictionary it means, "Cause to be no longer in one's knowledge or memory." It sounds like a coercive, brainwashing process undergone. Sinister, unsettling stuff.

What's wrong with LEARNING MORE with an open mind and the possibility of reassessing conclusions or attitudes?

Yes Karl. I do not think that the type of activists (or anyone really) that speaks of 'decolonising' understands that if they went back to the point before Tasman or D'urville came to New Zealand and truely wanted that, they would not be holding their very political and very agressive anti-establishment forum.

For starters they would have to give up that 5G network slice that Iwi were given recently.

Lets not talk about were the medecine and food production etc that keeps them alive comes from.

These types of activists (and infact some MP's) need to see a psychologist pronto....that is before the doctor leaves the newly decolonised New Zealand......

The whole edifice of "Maori indigenuity" is a total fiction. They are settlers, as are all people living in New Zealand.

Libertyscott said...
This comment has been removed by a blog administrator.
February 6, 2022 at 1:31 PM

From the Herald just now:-

"Te Pāti Māori has called for a "divorce" from the British monarchy and to move Aotearoa to a nation based on Te Tiriti o Waitangi.
Party co-leader Debbie Ngarewa-Packer made the call today as the country's political leaders shared their views on the Treaty of Waitangi in a virtual broadcast for Waitangi Day.
"If you look at our founding covenant as a marriage between tangata whenua and the Crown, then Te Tiriti is the child of that marriage," Ngarewa-Packer said.
"It's time tangata whenua to take full custody of Te Tiriti o Waitangi from the Crown."

Translation - this is close to treason. A blatant power grab !!!

But at least you would have holistic, indigenous healing instead of Western dentistry, anaesthesia, medicine - a small price to pay if we lived as happily as the people of Wakanda or the indigenous Na’vi in Avatar.

The would be "decolonizers" have in turn been colonized by the latest radical groupthink from American, and subsequently, UK campuses. It seems they are incapable of arriving at a single original thought among themselves, despite dressing their nonsense dogma up in te reo.

What on earth this Far Left self-promotion exercise has to do with the interests of Wellington ratepayers is well beyond me. Just another gross misuse of ratepayer funds by a self-regarding, self-appointed elite. Where is the Auditor-General?

We have a weak , naive and corrupt leftist govt that's getting drunk on virtue signaling and redistribution . Of course Maori are going to attempt to take full advantage . And yes , if they don't go the full hog they will look extremely silly .

Commenting to Doug Longmire : The Maori Party calls for "a divorce from the British monarchy". Does that not in fact mean that they want unilaterally to cancel the Treaty of Waitangi??

So politicians are now openly dividing our nation . And China's not hiding their aspirations to be the next global superpower . The question is - Is our nation state being undermined from external entities ?

Come to think : Isn’t this whole thing so ridiculous it will be laughed out of court? “Decolonisation”! What do they mean? Colonisation happened – so how can they ever change it in any way whatsoever. Colonisation is history – history happened. Time cannot be turned back.

Presumably they will need sober legislation to commence their process of “decolonisation”. The whole thing will bog down in legal absurdities and impossibilities.

Every MP in New Zealand believes a person can change their sex with a simple online declaration. Anything is possible ls possible when we have these sort of people governing us.

Great to have you back Karl.

New Zealanders should be aware that what is happening right under their noses is a treasonous coup by stealth. That is exactly what it is & its all being pushed along by a compliant govt & the appalling actions of local govt - in this case as Karl highlights, the loathsome, wet, gutless & woke WCC.

This is all going to end badly for New Zealand. Very, very badly.

14% rates increase last year, over 11% scheduled for this year.
'We must invest in infrastructure'...
Lies, deceit, cowardice, corruption, theft.
When will Wellingtonians stand up against this rubbish ?

And while we're at, let's decolonise the British from the Romans, and the Spanish from South America...

It's not really going to happen anyways .. Politicians just want to keep the plebs divided and our Maori friends love their winning world war history :) .

Yet again, another great column Karl, but you also missed mentioning hospitals, technology, compensation, roading networks, internet, vaccines and defence forces... but admittedly that list could go on and on. I also find it interesting that this decolonisation narrative seems to me to be diametrically opposite that of the other currently woke theme which is all about embodying inclusion and diversity? In that light, anybody embracing this decolonisation nonsense should be fundamentally labelled a racist. As others have intimated, everyone that’s here has genes that hail from somewhere else and, despite the UN’s decree, none of us is truly indigenous. Surely, therefore, you can’t have it both ways - one minute enjoying everything including contemplation in the comforts that modern civilisation and integration has brought (in this case also at others expense), the next conceptualising a monothematic race and existence of a bygone era. To paraphrase something Joe Bennett once said, it might be all because there’s some dosh in it, but that can’t be so, for that would be a colonisers concept.

That all aside, in this case it's clear who is paying for it, and that is nothing short of a disgrace. You deserve a medal for calling it out.