Bob Brockie on matauranga and the fraud we call postmodernism

Today I'm honoured to publish a guest post by the redoubtable Dr Bob Brockie - scientist, sceptic and long-time cartoonist for The National Business Review (in its pre-woke era). 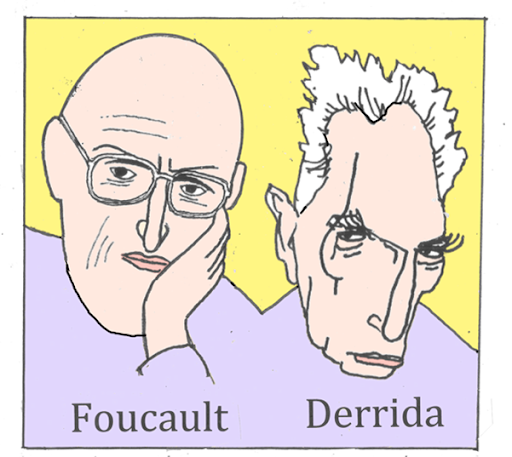 In the 1960s, French intellectuals Michel Foucault,  Jacques Derrida and others dreamt up  a new philosophy that came to be known as  Postmodernism.

Dissatisfied with modernity, they sought to overthrow its thinking . They asserted that men, women,  black, white, strait, gay, powerful or powerless read words differently, that truth, reason, justice,  social progress, and natural reality  mean different things to different people and are really  code words  for the establishment. They think the Enlightenment is a fraud perpetrated by white males to consolidate  their own power. They want to empower the marginalised.

These people argue that there are no such things as facts, only opinions about facts. Everybody’s opinions are of equal value, whether you’re a rocket scientist or a stone-age nobody, and everybody’s opinions are to be respected and never questioned or challenged. The supernatural and ambiguity are OK. Rules are made to be broken. Make your own rules. Anything goes.

Postmodernists argued that science is not absolute, and no better than any other system of knowledge — if not worse.  In 1996,  the postmodern journal Social Text published a ‘science wars’ double issue in which eighteen authors presented their case against science. A typical extract laid out the battle lines:

“In these wars, the self-appointed defenders of Science are seeking to police the boundaries of knowledge and to resurrect canonical knowledge of nature, against the attempts of the Others (including feminists, antiracists, psychoanalysts, post-colonialists, leftists, multiculturalists, relativists, postmodernists, etc., in all our bewildering diversity) to extend, transform, or maybe even dissolve the boundaries between the privileged truth claims of science and other knowledge”.

Postmodernism spread like wildfire in the late 20th century. Free of rules, architects, artists, musicians, linguists, sociologists, and educationists struck out in new directions with some remarkable achievements but left science untouched.  Since the 1990s, most of the world has moved  beyond the extremes of postmodernism but, belatedly, New Zealand has entrenched it in the country’s laws, in its schools, and universities.

New Zealander  Sir Paul Callaghan famously wrote  the aim of science is “To make discoveries  of permanent value, to transcend nation, race, culture and political perspectives in truly international endeavour, and to collaborate with people all over the world”.

Council reps from the humanities on our Royal Society, calling themselves Te Whainga Aronui o Te Aparangi, don’t wear this. They have brought their postmodernist ideology with them and, parroting Foucault and Derrida, assert that science is ‘based on ethnocentric bias and outmoded dualisms (and the power relations embedded in them)” and want “to place the Treaty of Waitangi centrally and bring alongside that, inequality and diversity issues holistically”.

Postmodernist councillors have white-anted the scientific integrity of our Royal Society and brought political, racial, cultural, and religious bias into its workings. In embracing the Treaty they are  imposing political, racial and cultural obligations, expectations, and limitations   on scientists - the equivalent of imposing the Bible, the Koran, the Torah, the Hindu Vedas, or the Book of Mormon on them.

World science and matauranga cannot be reconciled.   Science operates in the natural world but Maori thought is rooted in the supernatural.

Matauranga is often defined as traditional knowledge, passed from generation to generation. A prominent Maori maintains that indigenous knowledge belongs to iwi and that they should control it. How different is science! All science is provisional, and open to criticism and challenges. But challenge matauranga and you will be branded as racist.

Earlier this year, a Government educational working group argued that Maori science (matauranga) be given equal status with world science in our school curricula. Seven Auckland professors were alarmed at this idea and wrote that Maori knowledge ‘falls far short of what we define as science.’ The academics were also alarmed that kids could be taught that science is a tool of colonisation and belittles Maori culture.

The president and CEO of the Royal Society responded by saying they ‘utterly reject [the professors’] narrow and outmoded definition of science’ and, again parroting Foucault and Derrida, 'strongly uphold the value of matauranga’. What is a science teacher to say when a pupil asks which of the two stories is true?

Our Royal Society was once a bastion of science but has now abandoned truth, reason, and science to become a mouthpiece for faddish woke politics. The supernatural world of matauranga would be better taught in religious studies instead of science.

Thanks for publishing this, Karl. I see Bob Brockie at social events from time to time and he has a great inquiring mind. I so miss his regular columns.

The DomPost Cancelled him for straying from the One Platform of Truth. They are so terrified of any countervailing view.

You only have to look at how the media had a universal prior-blackout on yesterday's rather massive protest in Wellington (they didn't want anyone to know it was on, lest people go to it), then when it was so big they couldn't ignore it, they came out en masse attacking the protesters as extremists of multiple kinds, and to a news outlet parroting the line "more people were vaccinated yesterday than were at the protest."

I am more than a little concerned that journalists are becoming targets of protesters, but you only have to see signs about "govt-paid media" being carried at protests to realise many of these people believe the new government slush fund for the media is to pay for the "right" kind of story.

Some journalists are now writing stories that question aspects of government Covid policy, but methinks they are too late, and especially given the outrageous negative coverage of yesterday's protest. You only have to compare it with how they cover BLM and climate protests -- they cheer those ones on and give massive favourable publicity.

Auahatanga and the burning light said...

I think the clash of cultural values we are seeing, with the slow dismantling of democracy, the disestablishment of a free press, and the diminishing of science are natural and partially positive. It means those who believe in these things have to stand up for them, display courage and a willingness to sacrifice. That's how our predecessors won these rights in the first place. And it's the only way we'll maintain them.

Until the day before yesterday, western civilisation was animated by the global impact of two ancient cities, Jerusalem and Athens - the home of faith and reason. The authors of the enlightenment believed it was possible to retain the fruits of human reason without faith, however time has proved otherwise - welcome to our post modern dystopia.

The Biblical understanding of reality affirms that objective truth exists and is knowable. It is this knowledge that provides the basis for all scientific endeavour. If the gods are capricious, there is little point in conducting experiments because the rules of the Cosmos may change tomorrow, or next year, or at some time yet to be determined. Perhaps, as the post modernist tell us, there are no rules at all.

It is impossible to understand the technical and social advances of western civilisation without recognising the role Christianity has played in shaping our worldview. All social orders are predicated on an understanding of the sacred. In the west we are uniquely abandoning our former understanding and replacing it with what exactly? That individual choice and human desire is now preeminently sacred, and its revelations are a self realised fact that cannot be disputed?

The 13th century poet Dante knew where this led, and wrote “Abandon all hope, ye who enter here”.

Tova O'Brien in her televised cross last night on the Wellington protests described Destiny Church's use of "platitudes" when contrasting the Church's statements against what she described as an undercurrent of menace in the protests.

As the journalist she is (supposedly), I found the deliberate use of a term loaded with directional bias and judgment, to be unprofessional, jarring and quite frankly worrying. It is not up to her to pass judgments, but she does (as do the news editors and media bodies that facilitate her transmissions).

I do not always agree with dark conspiracies about media and propaganda, but this is a signal example of a very real and concerning matter in public life.

Bob Brockie points out the silly, post-modernist notion that any indigenous knowledge is a sort of science. Those two concepts are really contradictions in terms. This all simply goes to show that our politicians lack basic, humble, logical understanding of reality – which again goes to show that intelligence has nothing to do with it : Our politicians’ IQs are probably higher than average.

It is more that their cocksureness about their own ideology’s correctness blinds them from truly searching for an understanding : Why should we think or argue about it? We know we are right!

This is frightening for us New Zealanders – but it is some comfort to know that eventually, of course, reality will prevail. Not much comfort, though, that New Zealand society will suffer grievously for a generation.

Thanks for this. We see what's occurring. Bob still writes for the Listener, happily. I recall his interview with Kim Hill, at about the time all this nonsense was kicking off here.