It's taken 32 years, but David Stewart's heroism has finally been properly recognised 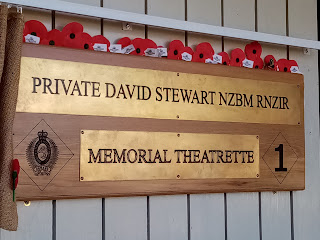 On Saturday I was privileged to attend a ceremony at Linton army camp in honour of Private David Edward Whawhai Stewart.

Exactly 32 years previously, on August 13 1990, Private Stewart died in a blizzard on Mt Ruapehu in an army training exercise that went hideously wrong. He was 23.
Stewart would almost certainly have survived had it not been for his selfless efforts to save the lives of his fellow soldiers. He could have saved himself by hunkering down in his sleeping bag, his only protection against the raging snowstorm.
Instead he repeatedly exposed himself to the elements, moving around in 180 kmh winds and near-zero visibility in an attempt to help others in the party and keep up morale. He ended up dying of exposure after his sleeping bag blew away as he attempted to share it with two comrades.

Stewart was one of six young men – five soldiers and one naval rating – who died that night. It was the worst loss of life experienced by the New Zealand Defence Force in a single event since the Second World War.

Only now is his heroism being properly recognised. At Saturday’s event, a plaque in Stewart’s honour was unveiled at the Linton headquarters of the Royal New Zealand Infantry Regiment’s 1st Battalion, of which he was a member.

It was jointly unveiled by his mother, Kathleen Kotiro Stewart, of Whakatane, and the head of the army, Major General John Boswell. Future generations of soldiers passing through the doors of the David Stewart Memorial Theatrette will see the plaque and be reminded of Stewart’s act of self-sacrifice.

The ceremony marked the completion of the first step in a patient and long-running campaign by former army officers to ensure that Stewart’s actions are belatedly recognised. In the second phase, they will try to persuade the government that he should posthumously be awarded the New Zealand Cross, New Zealand’s highest honour for acts of bravery in peacetime. It’s hard to see what argument could be made against their case.

Stewart’s heroism has been recognised previously – but inexcusably, not until nine years after the event. Even then he was awarded only the New Zealand Bravery Medal, the lowest possible honour. The Bravery Medal is awarded simply for unqualified “acts of bravery” as opposed to the New Zealand Cross, which is given for “acts of great bravery in extreme danger” – a more appropriate honour for a man who knowingly risked (and ultimately sacrificed) his life for others.

Stewart wasn’t the only hero on Ruapehu that night. Fellow soldiers Sonny Te Rure (now known as Sonny Tavake) and Brendon Burchell were similarly honoured in 1999. Both survived the 1990 ordeal and attended Saturday’s dedication ceremony.

Tavake’s actions on the mountain were no less courageous and selfless than Stewart’s. The two men ended up sharing a sleeping bag which blew away when they invited a third soldier, whose own sleeping bag had been lost (and who died), to join them.

Burchell, meanwhile, set out with one of the group’s two instructors to get help. But by the time the alarm was raised, it was too late; six young men lay dead in the snow from hypothermia.

Why no push for an upgrade to Tavake’s medal as well as Stewart’s? A pragmatic explanation is that two upgrades might have been too much for the honours system to cope with, and the case for Stewart was considered emotionally more compelling because his heroism resulted in his death.

A pertinent background factor is that for a long time, army chiefs gave the impression of not wanting to draw public attention to the tragedy on Ruapehu, even to the extent of being reluctant to acknowledge the heroism of their own men.

The army would justifiably have been embarrassed by the results of a military court of inquiry headed by Colonel Bernard Isherwood, which found the principal cause of the tragedy was that the two instructors were insufficiently skilled and inexperienced in extreme weather conditions. The inquiry also criticised the extraordinary failure to carry a radio that could have been used to summon help.

It’s perhaps a measure of the army’s discomfort that the full report of the inquiry was released only last year. Even Isherwood had to make an OIA request for his own report so he could write an account for the regimental history and was initially refused on the ground that he was no longer serving.

Isherwood, who left the army in 1999, and former Warrant Officer Bob Davies have led the charge for Stewart to be appropriately honoured. Isherwood spoke at Saturday’s ceremony and was blunt about the army’s failings: “I feel a responsibility for what happened that day. Not because I had any role in the event itself, but because of what I heard at the inquiry and the subsequent management of it by the army.

“I would also like to think that after 32 years we should have the maturity to acknowledge that as an organisation, we don’t always get it right; and we certainly didn’t on this occasion. In essence, we failed in our duty of care to our soldiers, the most important responsibility vested in us as commissioned officers.

“We allowed 11 totally inexperienced young men to be exposed to a lethal environment without the appropriate risk management resources in place. They were led by personnel who, through no fault of their own, lacked the training, experience and, in one case, the leadership skills. The conditions the group was exposed to were little different to a high-intensity combat environment on active service.”

Isherwood called the army’s treatment of Stewart, Tavake and Burchell a travesty. Among the families of some victims and survivors there’s still a degree of bitterness and resentment at the way the Ruapehu affair was handled – a feeling that the deaths were swept under the carpet in order to minimise discomfort to the defence hierarchy. But clearly, enough time has now elapsed for a new generation of senior officers to acknowledge the failings of the past. Saturday's event wouldn't have happened without the army's support.
I was invited to attend  because of an article I had written for The Listener about the 1990 tragedy. It was a moving ceremony that was well covered by both TVNZ and Stuff. (Newshub also had a story about the unfathomable – and insulting – refusal to correct a memorial plaque on the mountain which misspells of one of the dead soldiers’ names.)

For me, as a non-military person, the Linton ceremony was an insight into the esprit de corps that binds soldiers and can motivate ordinary men to do extraordinary things, as in Stewart’s case (and frequently in wartime). Most of the 150-odd attendees were former soldiers and the majority were Maori. Many had been Stewart’s comrades and had driven long distances to pay their respects.

Watching them greet each other as they gathered beforehand, it was impossible not to be struck by the obvious affection and rapport between them. There was a lot of good-natured piss-taking but underneath, there was an unmistakeable sense of loyalty, mutual respect and solidarity. This applied to Pakeha as well as Maori soldiers, and there was an easy familiarity in the way they all exchanged hongi.

The commanding officer of Stewart’s battalion, Lt Col Logan Vaughan, gave a speech in which he observed that while most soldiers join the army knowing they might be sent to war zones, death and danger would not have been on the minds of the men who went up Mt Ruapehu in 1990. Yet in what quickly became a life-and-death situation, Stewart’s soldierly attributes asserted themselves and he put his mates first. “I couldn’t think of a better example of comradeship,” Vaughan said. It’s easy for urban sophisticates to be cynical about such old-fashioned concepts as comradeship but in the context of Saturday’s event, it struck an authentic note.

Stewart’s mother, surrounded by whanau, also spoke. Her speech was quiet, dignified and free of any hint of reproach for what had happened to her son. The waiata that the crowd spontaneously launched into after she had spoken would have left only the most hard-hearted attendee dry-eyed.

A Maori dimension – call it tikanga Maori – was central throughout the proceedings, but this was no display of ostentatious virtue-signalling such as you might see in the Wellington bureaucracy. It seemed the most natural thing in the world in an army unit that has absorbed Maori values. Being a soldier calls for a collectivist ethos that comes naturally to most Maori, and their Pakeha comrades seem to have absorbed it as if by osmosis.
Bob Davies (a Pakeha), in a speech in 2000, talked about the loyalty and solidarity exhibited by Maori soldiers, saying it encapsulated “what it means to exist for something other than oneself”. Davies tells me he was thinking of David Stewart when he said that.

Thank you Karl for attending and witnessing first hand our affection for all those who were on the mountain that tragic day, but also our affection for one another as we came from all parts of the country to pay our respects.